For “Classical for All” ; February and March are the months to celebrate Frederic Chopin’s birthday! On February 21st, we are putting our project GENIUS #CHOPIN on its feet with a great cast of players! It is a theatrical concert created by Emir and I, focused on the timelessness of Chopin’s music.
You can join us by purchasing your tickets here : www.geniuschopin.eventbrite.com
And here’s a little reading from “Classical for All” ;

“I do not climb so high. A long time ago I decided that my universe will be the soul and the heart of man. It is there that I look for nuances of every feeling which I transfer to music as well as I can.” – Frederic CHOPIN

“Hats off gentlemen! A new genius!” shouted a young music enthusiast in Leipzig. He had the score of a new piece by Frederic Chopin in his hand. He sat down at the piano and started to play the piece while everyone, including composer Robert Schumann, in Caffebaum listened to him silently. 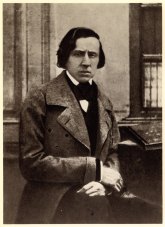 In his short life, often interrupted by his poor health,Frédéric Chopin composed more than 200 pieces for piano. When we consider all the other highly acclaimed classical composers of his time, composing only for the piano could be something that many people would look down to. However, whenever someone played his music, or let’s put it this way; whenever Chopin started to talk, he made his case. His sincere, open-hearted, sentimental and yet solemn melodies spoke to the listener, directly about beauty. This chat continues for centuries between Frederic and us.

However Chopin is no hero, and his life was no fairytale. He spent most of his life complaining about loneliness, away from his country, in places that he could barely speak the language. His humorous character grew grumpier and grumpier as his body weakened through the years. He wasn’t good looking, wasn’t rich, he didn’t own any property, didn’t have any children. He was nowhere close to being “the boy next door”. He could easily be forgotten in the history of humankind. He had only one thing; his music. During the war between Russia and Poland, he was away from home, in constant worry and grief.

“And I here unoccupied! And I am here with empty hands! Sometimes I only groan, suffer and despair at the piano! ”

He wrote to his journal. Is it only his talent that made him a genius, or his endurance and ability to hold on to something meaningful to him?

The genius of Frederic Chopin is our foundation, our corner stone in this theatrical concert. While following his life story with its successes, longings, hesitations, loves and losses, we are witnessing the lives of others from different times and places around the world. Some of the characters have gifts to be discovered, to be fought for, and some of them are waiting for an inspiration to take the first step. With his music, Frédéric Chopin will be there for them to give inspiration, strength and sometimes challenge.

GENIUS #CHOPIN is a Theatrical Concert about the genius of the celebrated composer and the genius within us, with six scenes in six different times & places with 13 characters telling the story of one composer.